Last post I promised a viewing of the small collection of Deb McDermott resins I've painted over the years. Oddly enough, after uploading them all to the blog, I realized they were all chestnut base horses! At least the new David in progress (see previous post) is a palomino. I've got another David, my final copy, I plan on doing in dapple gray. I've also got a Pearl (the 5.5" one) I'll paint something (still don't know what for sure) for a sales piece way in the future, and a customized Gomez I'm going to have a hard time parting with that will be a buckskin going gray. We'll see what else ends up in my "stable" in the future as well.

So the exhibit. I guess we'd better start with the horse that really started it all, a David painted homozygous tobiano. He was quite the topic back when I did him several years ago. I remember I had been struggling with dapples. I decided to try a different technique than the one I'd been working with at the time and I still use it to this day. Oddly enough, the David in progress took that technique one more step further in my quest to get amazing dapples. He was also the first horse I shot with my new camera and I was still playing with all those features trying to get a good shot. 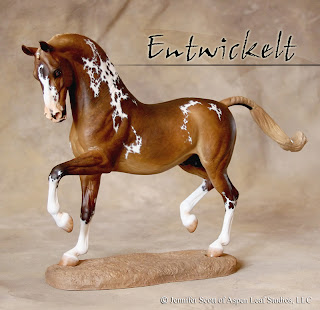 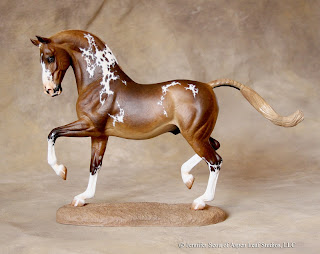 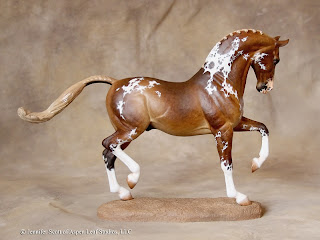 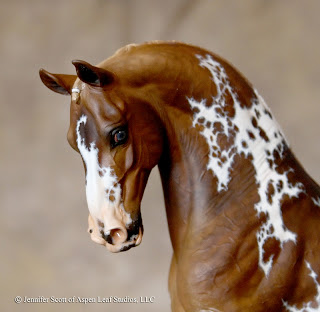 The next McDermott piece I painted was a Persuasion - the original big'un the little Pearls were modeled after. She was finished shortly after the David above. I remember being so jazzed with how he came out that I wanted to start another horse right away. Since Persuasion was my only other piece of Deb's at the time, I chose her thinking if I'd had such great luck with him maybe it'd cary over. It did. While it doesn't show the amazing quality of depth and color in the photos, this horse is probably my best chestnut *ever*. No joke. This is really a must see in person horse. 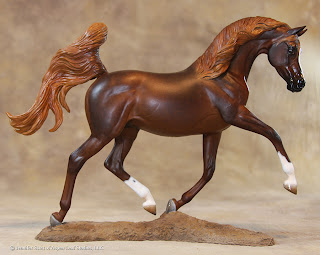 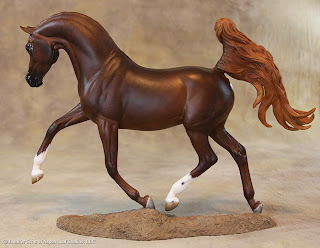 Next up is another great chestnut. I warned you about the chestnut thing okay? This is Bint Soraya, another traditional Arabian mare. I do love the toasty color of this horse! I also remember struggling capturing that color on film. For some reason, with my usual neutral background, she was coming out orange in photos and   I just couldn't color correct it to where it should have been. So, she got a black bg and all was good. This mare was one that finished up quickly - a week! Some of these kids just go easily and without a fuss like that. Trust me, I wish they all did. 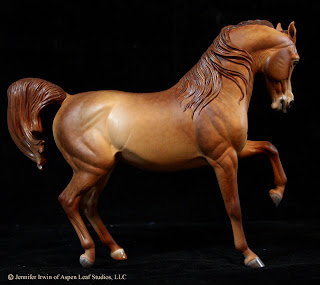 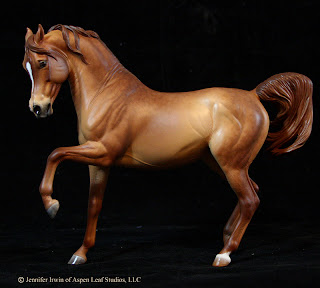 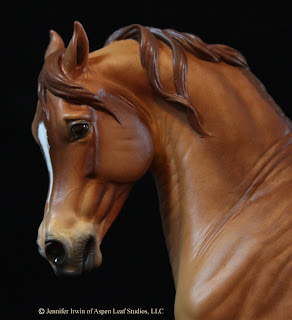 Mini Pearl I won't post too many shots of since you already saw her two posts ago. This little gem is definitely the most recent McDermott piece completed, being just a few days old. Coincidentally enough, she is owned by the same gal as the Persuasion above. 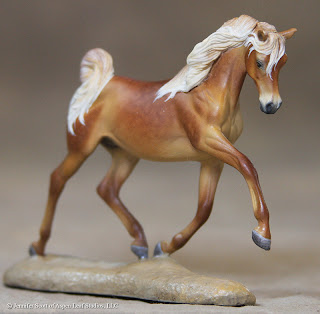 So, seeing as how I have so many chestnuts, I've got a new goal to paint more of Deb's resins so I can add some new flavors to the mix! :)

Okay, so I'm a *huge* fan of Deb McDermott horses. I love that woman's work. And, her style of sculpting and my style of painting just seem to mesh really well. The end results are usually fantastic.


So naturally, when I got a chance to paint another David any way I wanted I was a very happy panda. He is probably my favorite sculpture by her to date. Here is a dark dappled palomino with some soot coming along. I love the way the overo markings just create even more movement in this piece and add just that much more "pizzaz." I'm usually not a huge fan of flashy paint jobs, but this guy has so much presence to him already, he can handle it without being overwhelmed. 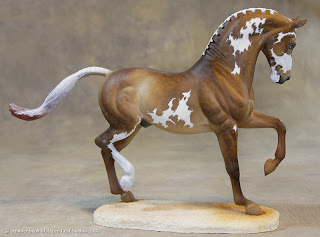 This side is just about finished. The mapping needs to be added to that tummy spot, and more white needs to be applied to that leg. The m/t of course gets saved for last with the hoofies and base. 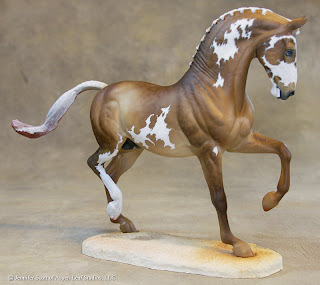 I adore this model's head. Honestly...just look at it! How could you not? 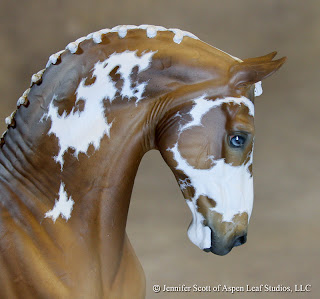 And those large eyes are great for painting. Can you believe this blue orb is done 99% in colored pencil? 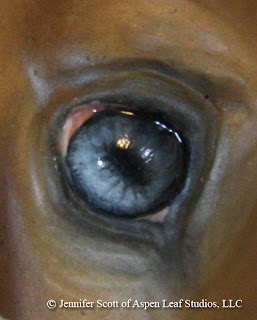 Where's the other side? Not quite ready for photos. :) I need to add the layer of raw umber to bring out the soot and block in the markings on that side. Honestly, that's really all that's left to do besides finish the details.

I'm thinking I might have do grab an idea from Danielle Feldman's blog and do an artist collaboration post of pieces of Deborah's I've painted. There's not many, but the ones that have been done are definitely lookers!

Jennifer Buxton mentions we've been having pretty cold days in Colorado on her blog. I'm up a few thousand feet from her, so we usually are about 10-15 degrees *colder*! It was -15 last night. The Saint Bernards are happy as clams. Myr is his cold, crabby self and hanging in there. Rocky, I'm convinced, is part polar bear. He is totally content to be out in this kind of weather.

I, am not. It was a great day to crank up the heat and stay inside! I figured I'd been spending a lot of time updating the blog with ceramics that it was time to post on painting again. So, since I got a lot done tonight, I'd show you a couple pics!

Technically this guy has been done for quite some time. But I never got around to taking photos of him until now. 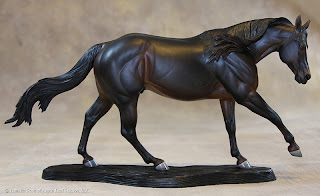 That color is super cool in person. Because it's layer upon layer of color, and those layers aren't fully opaque, you see this depth with the undertones coming through. 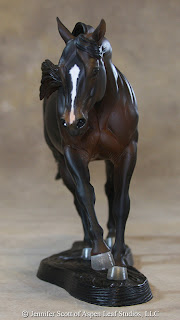 Hints of burgundy an blues and purples shine through here and there depending on where the light happens to be hitting. This guy was a commission and his owner will be thrilled to have him arrive. 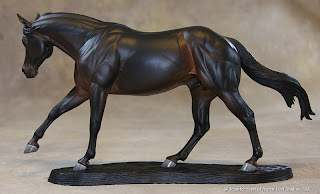 Next is a Mini Pearl. This is the little one, not the more LB/Pebbles scale one. She's also a commission, and I *know* her owner is ready to have her home! ;) 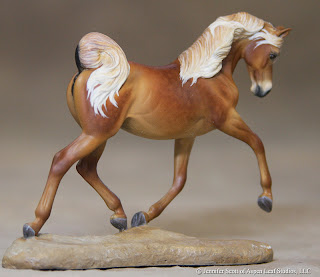 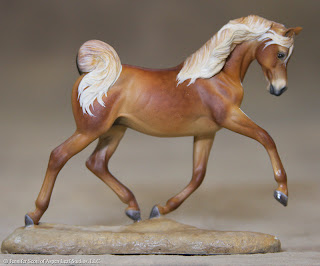 I absolutely love the light flaxen mane and tail on this piece. Lots of movement to paint on! I also love how her face came out. 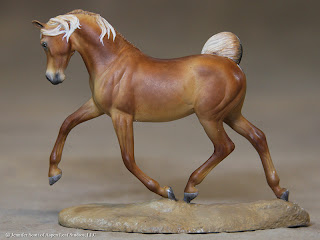 I've got lots more horses that had a lot happen to them today, but only took photos of the ones that needed to ship soon. Photos take a lot of time so I decided to use that time painting. I know that means less eye candy, but it also means a blog post for later. :)
Posted by Jenn Scott at 6:20 PM 2 comments: