So, since my website at this point is horribly out dated and I don't see any time to get to it in the near future, I'll post some WIP horses here. I'll actually be giving the website a nice facelift when I do get to it, so there'll be that to look forward too as much as the new photos that will be on it!
These guys were the two I took photos of today for their owner to get a progress report on. That's the only reason they get their own post. There are many others in studio in various stages of progression. This first guy up is an Eberl Adonis resin getting a red chestnut tobiano paint job. I don't know why, but I tend to do things one side at a time. This side as you can see is nearly complete. The other is still only base-coated. X^D Things left to do on this side will be to smooth the body color a bit more and maybe touch up with some dry-brushed oils to bring out shadows slightly more. The chest, neck, head already have that on. The white is not completely finished either, nor have I shaded those areas or done all the mapping yet. I tried a new mapping color and am very happy with the way it came out! 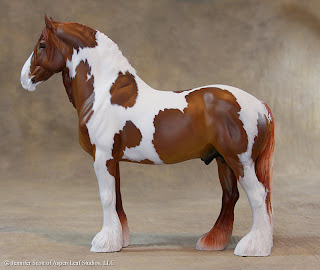 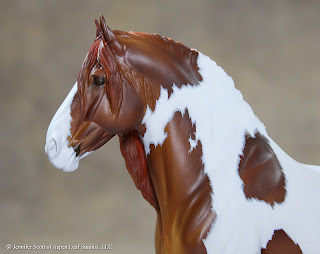 The second is SMB's little Oliver. He and Mom are getting painted like Exmoor ponies. I'm experimenting with glazes on this guy rather than going with my normal full on wet-on-wet shading for the overall body tone. I think it will work out well in his case because of the extensive pangare. His legs, eyes, and nose still need the black shading. He's going to be done before momma as she's still sitting in primer waiting for these two to get complete before she gets her new clothes. 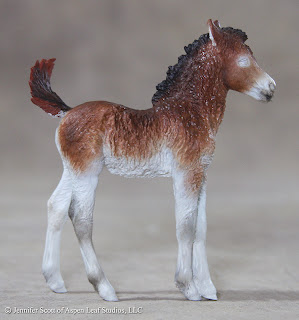 Posted by Jenn Scott at 6:15 PM No comments: