So I've been expressing an interest in china pieces for a while now. Let's face it. It's hard not to be sucked in by that glossy clinky goodness! Of course, one of our local residents here in CO is Karen Gerhardt, fantastic china painter/sculptor extraordinaire. :D Karen just got back from England where she spent a lot of time over at Alchemy learning about glazing and molding and all things earthenware related. She was gracious enough to host a "China Day" for Sheila Anderson Bishop and I!
Karen showed us her shelving, which holds all of her sculpture's plaster molds. Unlike resin molds, which are made from silicone rubber and are extremely flexible, bisque molds are made of plaster. The plaster of course is completely rigid, so there's so many more pieces that need to be made in order to wrap around the curves of the horse.
There are a couple ways to make the mold - one you can try to mold the whole horse as one big mold by creating a puzzle of mold pieces that fit together. I believe Stormwatch's mold was done this way and boasted of a count of 19 mold pieces!! Most resin molds consist of only two to three pieces, just to give you a better scope of things.
The second way is the more traditional way of doing it. You actually cut the body apart and mold the separate limbs, which once cast will be "glued" together before firing. Bronze is done this way too. I have to admit that when you read about this, this technique sounds scary as hell! But after our little clinic with Karen, it was completely un-frightening.
So, Karen is a master clinician! Sheila and I get there to find Karen has laid out everything for us to begin. Our project for today would be a Mini Boreas. Now, this guy will end up being close to LB/Pebbles size after firing, but fresh out of the mold he's closer to classic size.
Here's Karen with her lined up Boreas parts (one horse on one side of the table, a second mold for the same horse on the other side) along with Sheila: 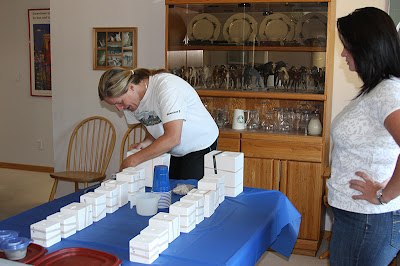 The biggest block there is the body mold. Then there was the mold for the head, four legs, and two ears. 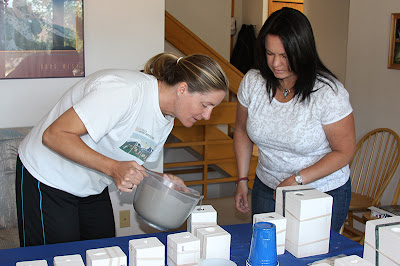 Karen's pouring the "slip" into the plaster molds. The slip is literally just earth and water. Karen brought up a great point when she said she loved working with china more than resin because of the organic qualities of it all. There's none of the chemicals used in resin here. Just a wonderful natural earthiness. I loved it too!
Sheila and I learned that when your pour slip into the plaster molds, you want to pour down the side of the hole, not just down the middle so that no bubbles form and cause a wall to trap air. You want the slip to fill the cavity and the air to escape out of it in the process.
Now, some of you are probably asking, "Well how do you get it hollow then?" The thing we learned about slip casting is that once the slip has been poured into the mold, the plaster mold immediately begins absorbing the water out of the slip, causing it to harden. Apparently there is no set length of time for this process either. It's basically trial and error. You can get a small idea of where the slip's water level is by checking your pour hole clay to see if it's formed a skin or not. When you think you have a sufficient amount of slip that has thickened to form your sculpture's walls, you tip the plaster mold over and pour out the extra slip, creating the hollow middle since the dried slip will not pour out. 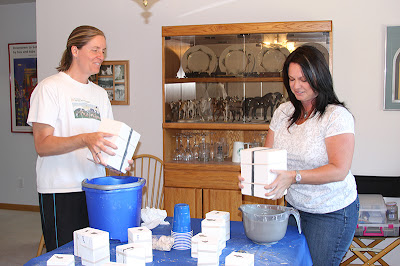 Karen and Sheila are shaking out the extra slip so we get the hollow cast. These molds are *heavy* so we tag teamed it by making the third person out the reliever.
Now, something we *all* learned that day! One thing you want to make sure you do when pouring out the slip is to only slightly tilt your piece so that the slip pours out the side and still has room for air to come back in. Otherwise you'll create a vacuum that will suck the drier walls of the body in. You can see the evidence of this below. 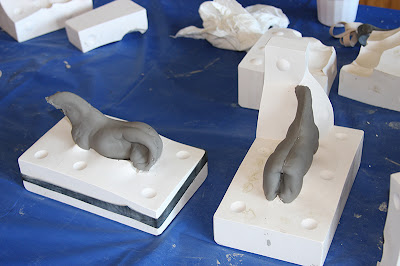 We poured each mold twice so we had some spare body parts. Sheila took the body with the caved in flank and I took the body with the caved in butt. We also had some fun episodes with the head pieces so none of them were quite perfect. It was all for the sake of education though so not a bid deal. Plus they will be custom clay bodies so we were going to do work on them anyway.
I got so wrapped up in working on the piece I forgot to take more photos. Luckily Karen had hers out so I'm borrowing these photos (with permission) from her. In these next two, Sheila and I are "gluing" pieces on. To do this, we took the body and the piece we wanted to put on it and applied a quick brushed on bit of raw slip to the edges. Then you stick together and hold for a few seconds while the air dries the slip and the pieces bond. Then you go back and dab in more slip to fill in the gap of the seam. We'll clean these up later when the piece has dried out a bit more. 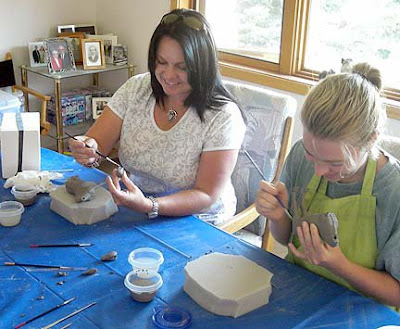 Sheila is gluing on her head while I'm working on my second back leg. 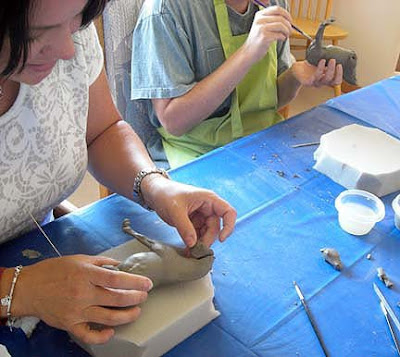 Obviously we made Karen take the best parts so she could get a real cast. :D Here is her mini Boreas clay body custom! 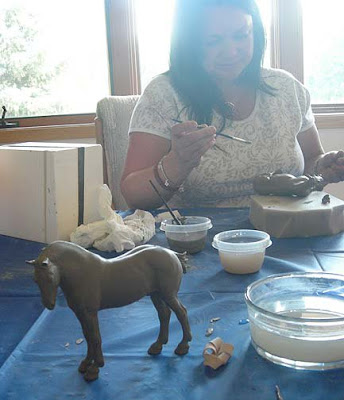 Karen also thought ahead of the game and sent us home with our clay bodies in a humid Tupperware piece, a tub of slip, and orders to finish our products so we could fire them! I'm was giddy with anticipation when we left.  I've been working here and there on my piece in between things and I've now made the adjustments on how to work with the clay. My boy is definitely going to be a custom and I'm excited to show him to you all. When I get him closer to where I want him, I'll start posting sneak peeks here.
A BIG thank you to Karen for inviting us over for a fun day working with mud and ponies! :D I'm definitely a convert and will plan on doing more!
Posted by Jenn Scott at 12:56 PM No comments: