In the Works Wednesday

So I like the idea of a at least once per month "In the Works Wednesday" column. There's always stuff going on over here, it's just a matter of taking the time to blog it. The latest stuff as I bet you've gathered is the ceramic side of things. Molds, bisques, and now...glazing! It's been something I've wanted to do for a while now. Getting to this point has been a culmination of all my cold painting and molding skills combined.

Since the type of glazing I'm doing is overglazing, it is very similar to cold painting. There are a few differences, but they are minor and I've adjusted techniques I used while oil painting to work with the slickness of the china. There have been some other challenges to pop up - like reds. 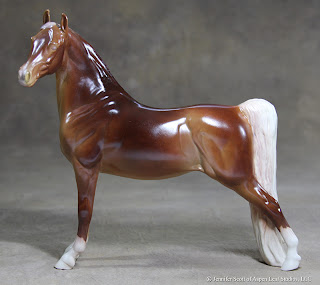 Red glazes don't like you. You glaze a fantastic red horse, put it in the kiln, and take your horse out to see that the color has disappeared/fired off in the process. It took about 5 fires to find out what worked best. While browns that had a warm cast would give you a slightly reddish tone, I wanted fire-engine red abilities. I found it in a product called Rose Glow Additive by Jean Nordquist. It stabilized my reds enough so that I could fire them and not have them fire out. You can make out the red tones in the horse above.

Another challenge is not so much with the glazing, but with photographing. The horse above looks glossy, but she's not. Even the matte horse below looks shiny. The glazing just seems to reflect every little bit of light, which makes photography a nightmare. I will be dusting off my photo cube shortly. And, because I am doing many layers of transparent glazes, the colors are wonderfully deep and change depending on which way you look at her. It's a really nice realistic quality...that does not photograph. By the photo of the Darcy above, you'd never guess the amount of color and layering in that dark topline/forehand area. It just shows as one big mass of dark. I also see lots of unusual angles in photos of these guys to try to capture that changeability. 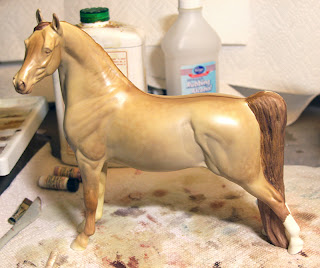 This Darcy was meant to be a buttermilk buckskin, but she just kept telling me she wanted to be a dun. So, I've caved and given in to her wishes. I'm debating leaving her this chestnut dun, or making her a bay dun with the black legs and m/t. I'd love to hear thoughts from people as she'll be up for sale when finished. 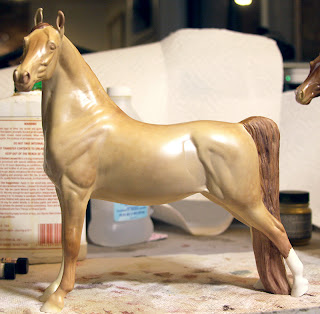