Lots of horses are getting painted and preparing to get out the studio door over here! I haven't had time to crop or edit (to correct color when necessary) any of their photos yet, but I have these guys pictured below photographed and uploaded to my computer. I have a Victrix in there as well, though she was a day late to join these for their group photo shoot. Probably a good thing as my background was barely big enough for these five!

Stay tuned for more photos of these five and the Victrix shortly! And then five-six MORE horses after that! I'm on a painting spree!
Posted by Jenn Scott at 10:57 PM 2 comments: 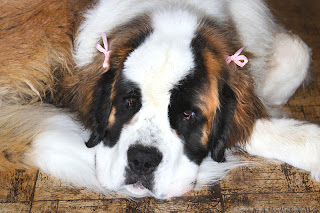 Despite the old, old, old joke, she's really not a pony. So, what is this adorable girl doing on my blog? Well, I figure this is my place for my creative ventures. I've posted my sewing projects (and just realized I never showed the finished piece!), and of course the sculpting, painting, molding, and casting of both resin and ceramic horses, but I haven't shown any photography yet. 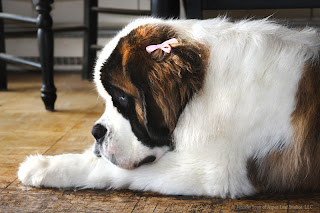 These two photos are among many that I took of my 1.5 year old St. Bernard Mookie. She got a much needed bath today and looked so pretty actually being clean for once I knew I had to document the experience. For those of you who don't know her, Mooks is a mud girl. The lighting for the photos came out great! And I played a little with Photoshop CS6 to bring out the colors and shadings just the way I wanted them. These two were my favorite of the group.

In the Works Wednesday

It's late, the light is bad, and I'm squinting because of it. It's a good place to stop before I can't see to go upstairs to bed!

I've gotten my highlight/body color on a new face: Amelia's Eberl "Rose" as well as the first layer of dry-brushed shadow. This horse's reference is this amazing dark bay with these bright dapples. The lower shoulder/elbow area got a little sampling of it tonight, but I was starting to pull off that first dry-brushed layer. It's kind of a fluke that it wasn't dry enough to rub on it. Usually those thin layers dry pretty quickly. I'm thinking it's because I added some linseed oil to smooth the edges out more for a better blending zone. Something I'll have to keep in mind for next time. The much softer edges are well worth extra drying time though!

Rose is one of those pieces that really changes when you put paint on her. This sculpture is extremely nice, but doesn't really come across that way being unpainted. I was shocked at how much I fell in love with her when she started to get her color! I'm excited to show you all how nice a "simple-colored horse" can look! 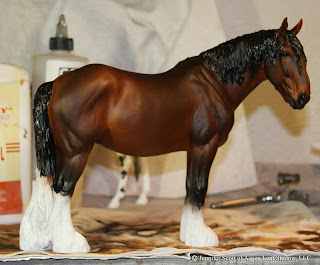 And, some more work done on JerryLynn's Sencillo. While the crappy lighting doesn't do anything for him, the main reason I posted this photo is the sections of different progress. From his head to his withers/elbow, his oil layers are finished. His tummy area shows the initial shadow layer. Lastly, that rump shows where I started with the highlight and body color oil base. You can see that the burnt umber adds a nice blanket of warmth to him. The raw umber gives him that "soot" look my customer wanted. 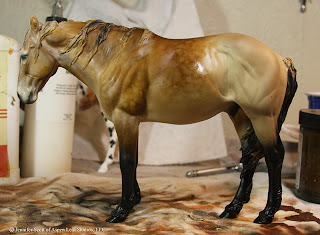 JerryLynn also wants him graying and battle-scared on top of the overo markings. I found some great photos of old horses (mid 30's) that showed their gray gene only just starting to kick in. There was a high concentration of graying around the face, in the flanks, behind the elbows...the usual places that go first. I've laid down some white hairs in oil in the front section that has the final raw umber rub. That area will get lots more hairs added individually in pencil. Then comes the overo markings, and then those scars. Then I get to happily hand him off to his patient owner!

One last thing to share about Sencillo. While glazing a ceramic Darcy in linseed oil, I started trying the removal of color to reveal the dapples instead of just "outlining" them in dark tones. While it failed miserably on china (though a swap in mediums solved those issues), the same technique is fantastic on resin/cold-painting. I find it gives me a great irregular dapple, and by using a somewhat worse-for-wear brush I get this amazing soft hair look. It doesn't show in the photo near as well as in person (possibly because it's wet and very glarey) but the effect is much more realistic than the technique I was using before. I'll try to get a good closeup when he's finished so you can see what I'm talking about.

Now I hear my bed calling...