I'm due (long over due in fact) for a web update - not just the gallery but the in studio page as well. I don't have the time for that large of a project yet, so I'm taking the quick way out meantime with a little blurb of studio projects. 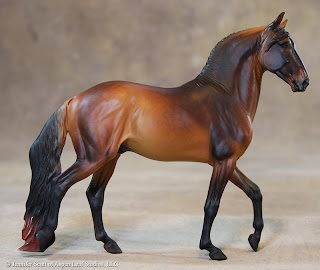 Remember several years back when I did this guy? ﻿Well, his owner and I had the most unfortunate luck of this being a rare case of a leaking resin that doesn't rear its ugly head until well after the paint has been applied. We traded the bad body back to Lynn for another and are having a second attempt at this guy. He's almost finished, just need to add more gold to the highlights and then add the dark to the other side. 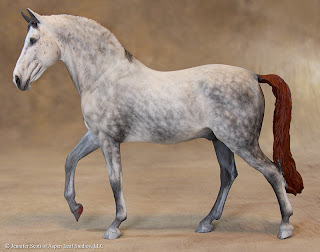 Another one of my long time residents. This Lorenz is finally up on the assembly line and looking good in his dapple gray coat! Little fleabites are being added to the flank, shoulder, elbow and neck areas right now. His legs are blocked in but still need work on this side. The other side needs everything. :) 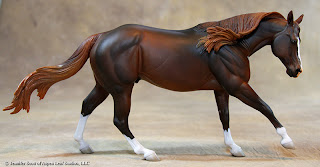 Two Reiners on commission are just about finished! The top needs his m/t and hoofies completed and I'm waiting on a Rio Rondo order of shoes to give him that finishing touch.  The bottom just needs to have his feet finished and he's ready to be sealed and sent home!﻿ 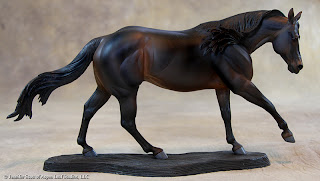 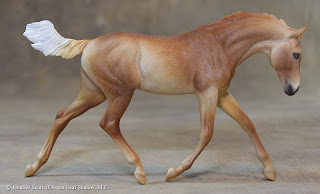 These next two are sales pieces that I'm squeezing in. Ikran, above, has been getting little hairs drawn on here and there for probably the last year. He's not very high on the priority list as I'm working more on commissions and resin orders. Since you last saw him in an earlier blog post, I've added more hairing work and then a layer of oils over top of that hairing detail to set everything in. I'm extremely pleased with the way he is coming out. I love this little sculpture, which certainly helps. It's probably my favorite foal resin out there today, though Morgen's Little Man Mango is right up there with him. 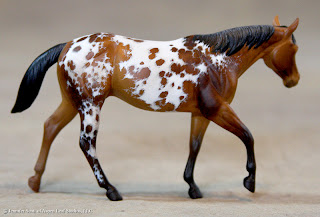 This guy however, I should have done in the next couple of days. I <3 mini's. Freshly released, he's Sarah's Little Lonestar and I'm trying a new way of painting on him. I had an idea for a "short cut" of sorts but wanted to make sure the look would still be the same and just as nice. So far, on the two horses I've tried it out on it's working out great! This means faster production, which is always a huge benefit! Still need to add the shadows and blanket on the other side and add the white markings on the legs and face. So far he's sailing along though. 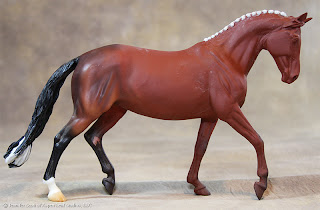 And I'm trying to integrate a plastic piece in now and then too. I like the change in medium to kind of spritz things up a little anyway. This gal is more performance oriented with her neck tucked and head on the bit. I've added braids and squared out her tail more. The braids need to be "dechunkified" and some smoothing needs to happen, but after that I think I'm ready for painting. Still no clues on color for her yet. I'm thinking a medium chestnut but I'm not nailed to it. Suggestions are always welcome. :D 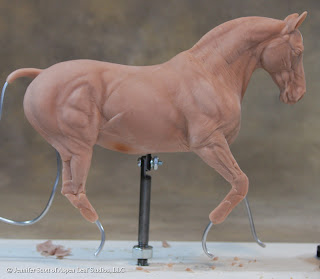 Also in the studio is a new sculpture project. I'm almost finished with the little Welsh pony mare, but I had to start this guy before I exploded with pent up creativity. Another warmblood? Fraid so. Why? A few reasons. One, I had a friend comment on how odd it was that while I was an "English type" rider (dressage/eventing) I had a lot of western style resins. I thought it funny when I realized how right she was. So, I'm endeavoring to give Depeche a buddy. Another reason for the second dressage oriented piece is completed business related. When I can afford to and take the time away from work, I ride at a high-end dressage barn. Let's just say I believe there's the potential for some jobs there. I very much want to branch out into bronze work and start focusing on commissioned sculpture.  So, I need a portfolio piece that showcases the recent skill level I've reached that would appeal to the buyer I'm trying to attract.
I have been wanting to do this pose for years now actually. It's a bit different from what you normally see in the model world. He is cantering, but he's only got one weight-bearing leg at this time in the gait. There are so many trotting ones I didn't want to go that direction, and I still wanted a versatile horse for other events besides dressage so I didn't want to sculpt a very specific movement like the half-pass or pirouette. And while we have a lot of horses in the canter with three weight-bearing legs like Depeche, there really aren't mane with just one. I believe that's because of the need for either a base or pegs. This guys will most likely have two. One in his right back leg, and then one in the left front.
So, yes the update was a bit long, but in that there were lots of photos to see, I'm sure you'll forgive me. ;) There are still many more horses in progress, but their paint was drying or they were at another otherwise impossible to photograph stage.
Posted by Jenn Scott at 11:40 AM

That little lonestar is adorable!!! I want him!!