Most people are content with one hobby. I'm not one of them. I'll admit to being guilty of having many. Probably too many, but at least I can't complain of ever being bored. I may actually open up a second blog for this hobby I'm about to share, but until then I'll post here and see if anyone's interested in it.
I tend to be interested in hobbies that I can express myself creatively in. Sewing is one of those. My mom was the one who got me into it as it's her big thing. She used to sew my brothers and I clothes while growing up. While I've not tried any clothes yet (though I'm just about to make the plunge), I've been quilting for several years now. There is just something about a quilt made by you or someone you love that just makes you happy. Definitely one of those "feel good" things. Here's a couple of projects I've made in the past:
A bag for a friend's baby shower in her colors of pink and brown. 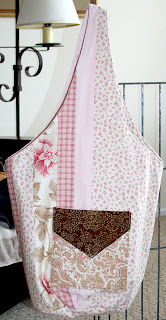 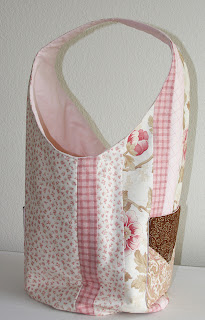 A "raggie" quilt for our friends' first baby.
His theme was cars/airplanes/motorcycles in primary colors.
The blue fabric is old jeans cut up into squares and the red plaid is flannel -
nice and soft for baby's skin!
(By the way the quilt is perfectly square. My photography not so much) 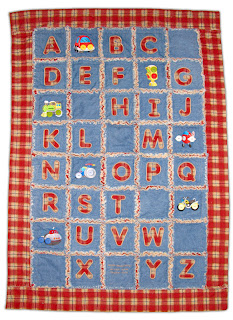 This one was made from a Bunny Hill kit for another friends' first baby.
This was my first attempt at applique and I love it! 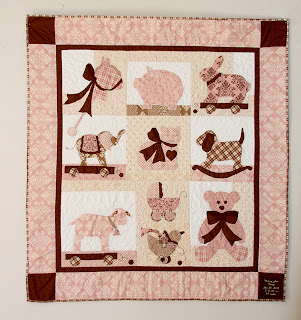 There are others, but maybe I'll make another post out of those. I mainly wanted a little lead in sampling. You all get the idea. My next project that I'm working on is for my Mother-in-Law's Birthday coming up at the end of January.
One of my favorite designers are actually a local Colorado company consisting of Mom and two daughters - Sweetwater. I like there stuff because it's not so "floraly" like most fabric out there. It's lots of gender neutral prints and geometrics. They have a pattern called Pure Happiness that was designed for fabrics of their "Pure" line. I don't have yardage of the fabrics, only what's called "fat quarters (which is basically a 18" x 24" piece of fabric) so instead of using only three colors, well, I'll be using them all.  Aren't they pretty? 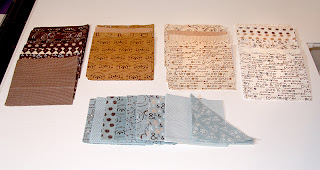 So I want to create a gradient effect, going from light in one
corner to dark in the opposite corner. I'll use the blue fabrics
for the bow ties. You can see the guide I made in the
lower left of the photo below.

I've got the top half of the quilt top just about fully pieced together.
Just that one last row, which you can also see in the above photo.
Below is a close in shot. 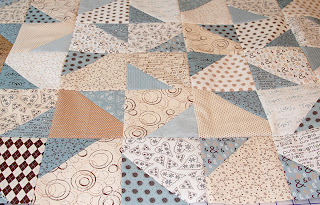 After I finish the quilt top, I'll sandwich the quilt back, batting, and top together and start the quilting. When that is finished I'll add the flowers and buttons and quilt binding. I think I'll do some blogging on those steps in case anyone was interested in the step-by-step making of a quilt.
﻿
Posted by Jenn Scott at 8:47 PM

PLEASE do do a quilt blog! I need to learn how so I can finish the quilt top my mom left me and I don't know how!