Myr gets to use his new bankie!

Most of you know by now that I have a really special little Arabian named Myrlyn. He's really not little height wise - he's 15.2 (tall for an Arab), but is very very narrow. So narrow in fact, that the 72" winter rug I got him last season was basically a tent on him. It was bad. And, now that I have my own place that he can be turned out in, I really needed a winter turnout rug that fit him. He likes to run around a lot (which is beautiful to watch), but because the tummy straps and underleg straps hung down so far, I was terrified he'd catch a leg in them and seriously hurt himself. Yes, I am a paranoid momma.

I'm a bit of a bargain shopper when it comes to horse stuff - not because I won't spend the money (I have no problems at all in that department! ;P) but because I just don't have it to spend. But obviously this was a very needed item. So, a friend and I were looking at rugs for our horses (in fact, Liesl's just posted photos on her blog about Leg's and how she's pretty in pink in her new winter rug! http://phazestudio.blogspot.com/2009/11/indian-summer.html). After searching on craig's list and not really finding anything I went to check on ebay. Low and behold, there was this SMASHING navy and white plaid designer blanket for a rediculously low price. It was tiny at 62" but I knew Myr was narrow enough he may just fit. So, I grabbed my measuring rope and ran out to the barn. Low and behold Myr measured at exactly 62". It was my sign that I was supposed to buy it (My shopping self really doesn't need much encouragement). Well, I put the bid in and kept my fingers crossed for the next few hours (which was how much time was left in the auction) that no one else would want it. It was so nice that I couldn't imagine being the only one wanting to buy it. But I think the small size saved me.

So, anyway, we have our second big snow storm here in Colorado very much underway. We got at least a foot overnight here in Evergreen anyway. So after going out to the barn this morning to make sure all of Myr's needs were met, I started snapping some photos! 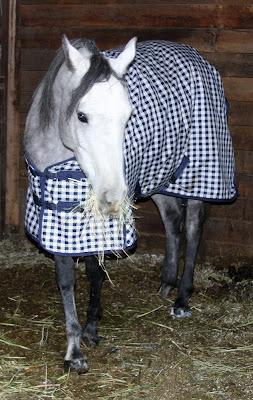 This next photo I absolutely love and think came out so nice with the dark background of the barn's interior faded out and the snow lightly falling around him. I think the hay is a cute touch too. :D 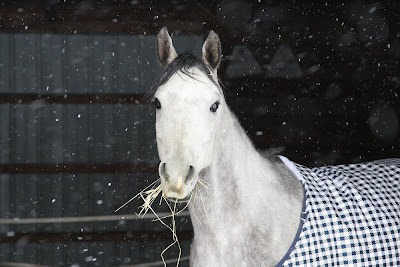