Sales and the painting continues!

So, first up, the gal who was going to buy Johann earlier had to take her kitty (very cute thing) to the vet for eyelid surgery so the sale fell through. He's back up for offers again so if you thought you'd missed out you have another shot at him. Lots more photos and information as well as bidding info on my sales page of the website: http://equine.aspenleafstudiosllc.com/sales.html 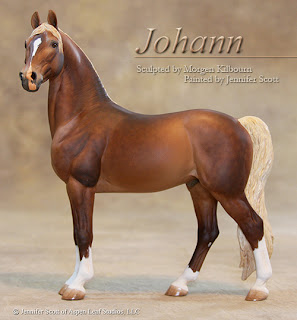 I have also been a painting fool lately. Now that the resin backlog is just about gone (only have a few stragglers left!!!!!!! Yes I am excited about this. ) I am focusing my efforts on the painted commission backlog. I did a rough count of how many commissions I currently have, not all of which are in studio at the moment, and I just about face planted. More motivation to knock that number (which shall remain my dirty little secret) down. Bring out the boxing gloves.
Plan of attack? KO the oldest pieces first of course. I spent most of this week prepping anything within reach so that when the painting began it could just flow to the next horse and to the next one, etc without being interrupted. I grabbed two Gawyn's, which are still needing that little finishing work on the prepping still - I'll take them on again next week, a Darling, a Legacy, a Justin Tyme, a Lorenz, one of the Copra Mares (head down one - I struggle with their names), three Reiners, an Ikran, Ahzam, Pixie, and a Darcy. Oh yeah. Momma was busy! Most of those last ones had paint work already started and I'm working on finishing them.
Of course, my airbrushes, which I use for basecoating, decided not to cooperate with me. My favorite for basecoating decided he'd like to get a big fat clog and would rather take a nice relaxing soak in Restorer than work. Lazy. My Micron, which I usually only use for finishing work, decided to be fragile and when I took the head off for cleaning him as well, it broke off instead and left a piece in the threading of the brush. Fabulous. Luckily, there is a gal at Meinenger's Art Supply who says she fixes these things all the time and it's easy and cheap. Bad news is that the part itself is like $50. Ouch.
I did manage to get a few things basecoated though before Lazy decided he was done. 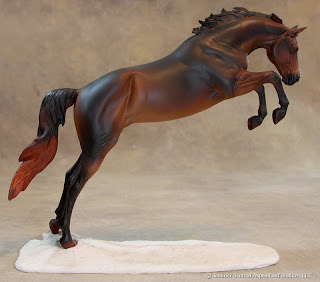 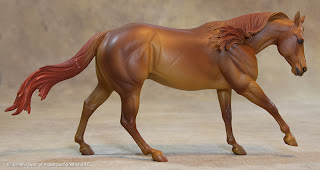 Rose Reiner4 - finished color will be a bit darker than this, but those yellow oils are so transparent they really need to have more highlights as a base. He'll be a rich golden brown liver when he's done. 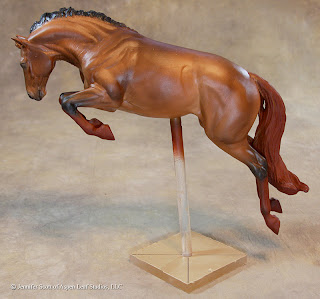 Not only did I manage to get this Legacy basecoated, but I applied a layer of oils on him last night too. The oils are still wet so he's a bit shiny. He's also on my "scrap base" which has a hole that was drilled crooked. It's perfect to hold him up while painting because I don't have to worry about dings and what not. He's in his unpretty stage right now, but he'll be gorgeous finished in a light golden bay. 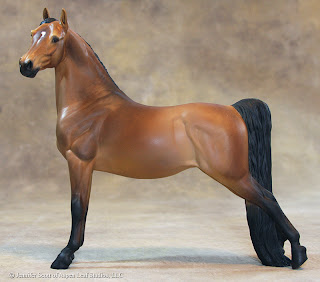 Darcy will be a dark dappled buckskin. I had to darken her flank an chest area and now need to reapply the darker shading, which adds the dapples at the same time. 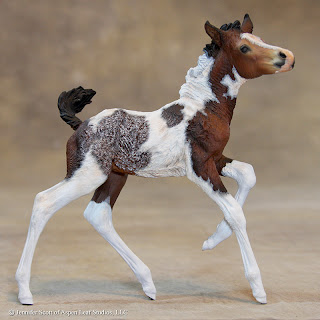 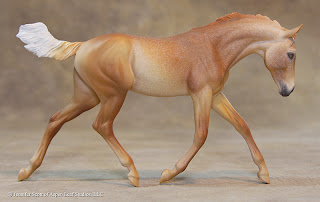 And this is probably my favorite foal sculpture to date - Ikran by Brigitte Eberl. I had such a fun time painting the Breyer foal "baby gray" that I'm doing the same thing here. Only instead of a bay base, I'm going with a chestnut base. 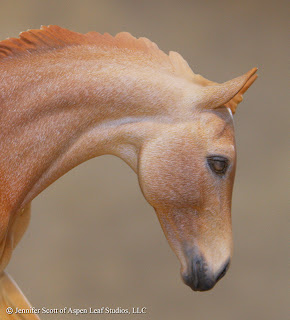 Check out that extreme hairing close up. Still not finished yet either!
I'll also be posting soon about a live show I'm holding in July. In it there's some scrumptious plaques I painted that were sculpted and donated by Kitty Cantrell. Members of my mailing list saw a peek at one. There will be lots more of my painting needed for all sorts of amazing prizes for the show. I'll just end the post here on that little teaser.
Posted by Jenn Scott at 10:37 AM